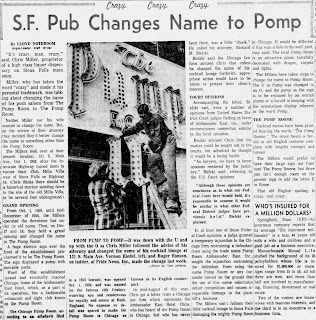 When a government official decided their club was in the way of the new Interstate system, Chris and Mae Miller had to vacate their Club Milla Villa in 1958. They bought the Baxter Bar at 131 S. Main and changed the name a few months later to The Pump Room, a tribute to the famous Pump Room in Chicago's Ambassador Hotel.

The name didn't last long. Just as their old club's location had been deemed inconvenient, so now was the bar's new name accused of being illegal. The Ambassador East Hotel fancied their Pump Room to be a fashionable restaurant and nightclub. Most folks believed the Millers ran a nice nightclub--in 1959, the Argus Leader called it "an attractive place, tastefully decorated with drapes, carpets and lights"-- but the Ambassador folks weren't in the name-sharing mood. If the Millers didn't change their bar's name, a lawsuit was a'comin'.

Fine. No Pump Room. However, the Millers weren't just going to tear down their entire sign. The "U" was removed and replaced with an "O," and the Pomp Room was born. No one had any idea what that name would become. 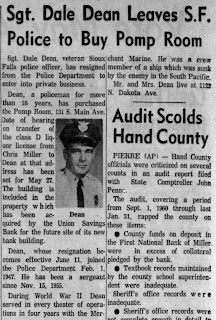 Sgt. Dale Dean was one of several police officers known to have an off-shift drink at the Pomp Room, so it made sense that he'd end up buying the place. He'd been a cop for 16 years. It was time to run a nightclub, a nightclub he and his buddies already liked.

A rancher named Duane Ertz was chatting with a hunting buddy in 1971 when the subject of The Pomp Room came up. Ertz was intrigued. On April 1, 1971, he and his wife, Jeannie, purchased the bar. Who knows if this single decision came with the foresight to see that the club would become a family legacy and a rock-and-roll icon? One thing's for sure: When National Direct Sales published a newspaper notice congratulating The Pomp Room on their "beautiful new carpet," they damn sure didn't know that the carpet would become legendary for its own reasons. 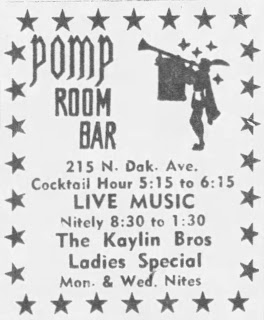 Popular posts from this blog

Laughs, tears and a hint at the stories from the Pomp Room's greatest characters are all here.
Read more